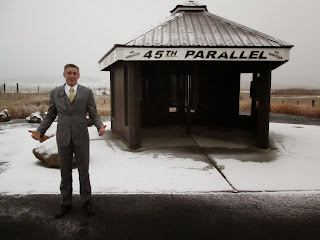 Half way between the equator and the north pole. 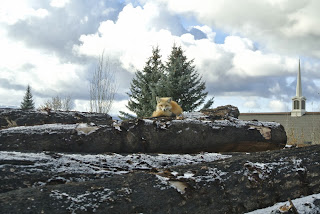 Mr. Fox is living in our back yard! 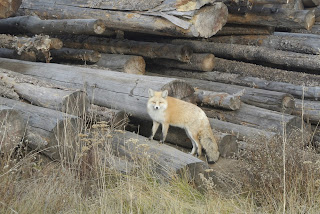 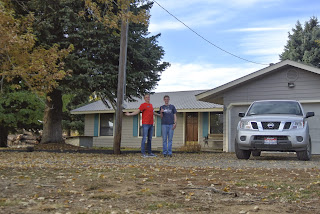 Home sweet home!
Posted by Unknown at 9:08 AM No comments:

You are either a gansta or a saint...


Coming to you from McCall with another great week under my belt! I'm starting to really get past that "new missionary" thing, and really understand what we are doing out here. It feels great! We had two meeting this week, one in Nampa, and another in Baker city. (those are both 3 hours one way) They were great meetings but it really killed our days haha. Plus i had the flu Wednesday-Friday, but I got over it really quickly! I loved each of the meetings though, at the new missionary training meeting in Nampa i got to see all my friends from the mtc which was pretty great! We talked a lot about how we can better our work. Then at our Zone meeting in Baker City we did a lot to figure out how we can find people. Which is important for us specifically in McCall because everyone is so far away that door to door is really not that effective use of our time. We are starting to get creative with the ways we involve members and I think we will start to see some return from that in the next couple weeks. So I am pretty sure that i say this every week but I am growing spiritually so much! I learn, and learn, and learn, every day! and I love that! I can't even start to imagine who I will be after 2 years of this. At Zone conference my ZL said something i really liked. He goes, "when I came out here i thought it was going to be a "punch in, punch out" but I am here to better myself so I can be a missionary for the rest of my life."  I loved it, it really changed my mentality about things because I felt like that for the first little while haha. But I am here to help people become better by bringing them to christ, Just as much as I am building a foundation for the rest of my life. We ate dinner with an older couple who have 7 grandchildren on missions right now! I was just thinking about how incredible that is. Because of their faithfulness, the gospel is being shared to literally thousands of people in every corner of the world! The lord is hastening his work, everywhere you look there is proof of it. I can feel it especially now that I am out in the field.  One of the biggest proofs of it is the Book of Mormon. That book has been saved for THIS dispensation for THIS generation, and I had never thought of it as a sign of the hastening till now but really it is. I really am beginning to love the B.O.M. I was always so confused when i read it before haha. Since I got to the MTC I have already read it once and I have  started up for another round. As a mission we are supposed to read it by Dec, 18. I was so pumped when I heard that goal. Because when I am studying in the scriptures that is really when i feel the spirit and it is when the spirit has the opportunity to teach me the most!  Yesterday one of our Less Actives came to church and after being there for like 5 min, she just started crying and leaned over to me and said. ( this is ridiculous i should have come back a long time ago!) I can tell that yesterday was the start of a new chapter in her life, and that is exactly what I am here to do. Help people change for the best. In the last GC, pres Monson said that trials are so we have the opportunity to build ourselves back up better than we were before WITH the spirit central to our lives. (something like that haha) But if that's all I do out here i know that i will have been the tool through with Christ saves his children. Yesterday we were meeting with one of our recent converts and we had a big conversation about how crazy the world is etc, etc. Anyways he just stood up and yelled, "when it comes down to it your either a Gangtsta or a Saint."  haha. I had a really hard time not laughing. It was awesome! So if i can leave you all with one thing, it would be " are you a Gansta or a Saint? " or in other words  " choose ye this day who ye will serve - joshua something"  But if you wanted to be like a gansta who followed the commandments, loved the lord, and endured to the end, that would be pretty cool too! haha.

Peace out!
Love from McCall!

Posted by Unknown at 8:55 AM No comments:

Week #5 Got to make some noise!

I cant believe that it is already another week.  It is sorta crazy how the days are long, but the weeks fly by! Then again I guess it has only  been 4 weeks haha! But this was definitely one of the best weeks! As far as numbers go, this was the highest we have ever been! We actually had 5 investigators at sacrament meeting yesterday. It was one of the greatest experiences yet because this sweet lady named Bobby got up in front of the whole congregation and bore her testimony and thanked the whole ward for the service that we provided. ( i guess i should back up and tell you her story) Her and her husband have had some pretty serious health issues so they are going through some hard times, and they needed help. So she put a note on a car in the church parking lot 2 weeks ago just asking for help. Myself and a man named Dan Jones went out and visited them. Yesterday we ended up taking them an entire trailer full of wood to get them through the winter. They were so grateful, they just did not know how to thank us,  and i told them they should just come to church! And they Did! They were both really interested in the service and she said that is was the best she had felt in a really long time! Anyways she ended up getting up in testimony meeting and thanking everyone! While she was talking she kept describing what i knew was the spirit. I was so happy! And i could feel the spirit so strong! After the meeting they asked for the discussions and we are teaching them this week! Things are really starting to pick up. We had dinner with one of our investigators, and it was way fun. It was "a true idaho meal" we had grouse, (we each had a bird to ourselves) haha. A little bit of dear on the side with corn and potatoes. He said he shot them all within the last week haha! I am definitely in farm county  but it makes me happy. We were visiting another investigator and they were showing us pictures of all 7 of their horses inside of their house!!! haha. I guess they have a tradition that they just let the baby horses inside for the first couple weeks of their lives haha. I think I am going to start to make a list of the most redneck things that happen up here haha. Halloween was nothing special, we had to be inside  by 6:00, I'm sure it was the same for most every missionary that was in the United States. But it was nice to be able to relax a little and just eat some candy. (the members are really good about giving us treats!) Aside from all the cool spiritual experiences It was a good week for me because I got to play guitar! twice! I didn't realize how much i was going to miss music. Anyways last friday the ward had a little pot luck dinner thing and Brother Hunt brought a couple guitars! I was so excited, and when i walked in he was playing a Neutral Milk Hotel song! I was like "What!!??"  It made me so happy and I was way surprised because he is like a 60 year old guy in the bishopric. Anyways we got to jam a little bit, I played some Radiohead songs and he recognized them! It really got me excited to be playing again and talking to someone about gear and different bands we both like. But I will tell you this, I didn't think it was going to be someone in the bishopric haha.

Then last night at our dinner appointment the member we were eating with had a guitar and they asked me to play. It was so fulfilling to be able to make some noise! Now all I need to do is find a member with a drum kit haha!  Hope you are all having a great time back home. And to everyone in the service of the lord, Just remember the importance of the work we are doing. It really strengthens me to know that so many of my friends are out there doing the the same thing that I am. We are part of a great thing, I can feel that now more than ever is the most important time for missionary work. Keep it up! and DONT GET ELIMINATED!

ps. Daniel, that is cool you guys are starting the whole 21st century missionary thing. I swear that is all anyone ever talks about up here in my mission. "when will we get ipad's, when can we get on facebook?"  Let me know what you think of it once you really get going. And to everyone else serving, do you guys have any of that yet? if you do what do you think of it?